The Dell Rapids High School baseball team won its 2021 season opener against Tri-Valley, 7-3, on Thursday, April 1st.  This was the first game for the high school club team since the end of the 2019 season.

Tri-Valley got on the board first after getting a rally started in the top of the first inning.  The first two batters of the game reached base, and Luke Lofswold scored on an RBI groundout by Beau Keith.  Dell Rapids tied the game in the bottom of the inning.  Brayden Pankonen walked, stole second, and advanced to third on an error.  He scored later in the inning on a wild pitch to make the score 1-1.

After setting down Tri-Valley in order in the top of the second, Dell Rapids took the lead in the bottom of the inning.  Will Jaton drove home Aiden Boechler with a double to the left-centerfield gap.  Jaton later scored after Dylan Mathis got into a rundown on a steal attempt.  Dell Rapids led 3-1 after two innings.

Keith drove home another run for Tri-Valley in the top of the third after the first two batters reached to start the inning again.  Logan Colwill added an RBI single to tie the game 3-3. 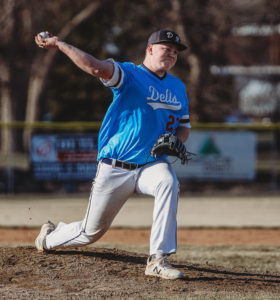 Boechler finished 2-2 with two RBIs.  Jaton was 1-3 with an RBI double.  CJ Smith was 1-1 with a triple, and A. Henry finished 1-3.  Brady Larson started the game pitching for Dell Rapids going three innings while giving up three runs, all earned, on three hits, three walks, and three strikeouts.  Landon Ruesink took the win pitching four innings of relief giving up just one hit with one walk and five strikeouts.