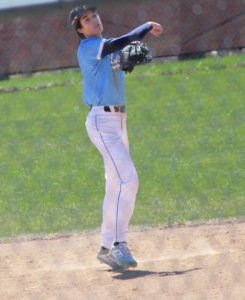 The Dell Rapids High School club baseball team played three games in Madison over the weekend of April 17th and 18th and finished the weekend going 2-1 in those games.

Their only game on Saturday, April 17th was against Woonsocket/Wessington Springs/Sanborn Central, and they earned an 8-2 victory.  Dell Rapids scored two runs in the top of the first and held a 6-0 lead after they were done batting in the top of the fourth inning.  W/WS/SC scored two in the bottom of the fourth, but Dell Rapids got a run in the fifth and seventh inning to secure the victory.

Aiden Boechler had a double and two RBIs.  Brayden Pankonen had a hit and two RBIs.  Kaeden Eastman finished with a double and an RBI.  Brady Larson had a hit and an RBI.  Landon Ruesink, Will Jaton, and Treyse Eastman all had a hit in the game.  Jack Henry pitched five innings giving up two runs, one earned, on one hit while walking two and striking out seven.  Larson pitched the final two innings giving up just one hit while striking out six batters.

The second game of the weekend was against Hamlin on Sunday, April 18th.  Hamlin survived an exciting Dell Rapids comeback to earn a 9-5 win in extra innings.

Austin Henry had the only RBI for Dell Rapids in the game.  Ruesink, Pankonen, Jaton, Larson, Boechler, and J. Henry each had a hit.  CJ Smith pitched three innings giving up five runs, two earned, on three hits with one walk and five strikeouts.  T. Eastman pitched 5 2/3 innings giving up four runs, one earned, on four hits with four walks and 12 strikeouts.  Ruesink pitched the final 1/3 of an inning earning a strikeout.

Dell Rapids bounced back in their next game and defeated Madison 8-4 on Sunday.

T. Eastman finished with two hits, including a double, and two RBIs in the game.  Boechler and A. Henry both had two hits and an RBI.  K. Eastman and CJ Smith both had a hit with an RBI.  Ruesink collected two hits, and J. Henry added a double.  Pankonen pitched five innings giving up three earned runs on four hits with five walks and five strikeouts.  A. Henry pitched the final two innings giving up an unearned run on no hits while walking two and striking out six batters.

Dell Rapids (5-4) will travel to Garretson on Friday, April 23rd.