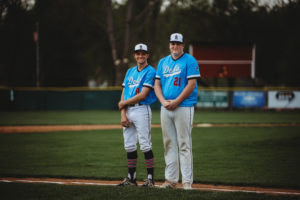 The Dell Rapids offense scored in every inning, including 10 runs in the third inning, while belting 14 hits in an 15-5 win over Flandreau at Rickeman Field on Monday, May 17th.  Dell Rapids’ two seniors, Kaeden Eastman and Brady Larson, were recognized prior to the game.

Flandreau got a couple of early runs in the top of the first inning on three hits.  Dell Rapids got a run back in the bottom of the inning when Brayden Pankonen scored on an RBI triple by Landon Ruesink.  Flandreau scored one more run in the top of the second inning off an error for a 3-1 lead.

Dell Rapids cut the lead back down to one run after an RBI ground out by Larson, scoring Jack Henry.  After Flandreau scored two more runs in the top of the third, Dell Rapids took control of the game.  They scored 10 times on eight hits and two dropped third strikes to take a 12-5 lead.  Dell Rapids would score two more times in the bottom of the fourth and one more in the bottom of the fifth to end the game on the 10-run rule.

Larson pitched one inning giving up three runs, two earned, on four hits with one walk and one strikeout.  J. Henry pitched four innings giving up two runs, one earned, on three this with three walks and five strikeouts.

Dell Rapids will host Tea on Tuesday, May 18th, and then finish the regular season at home against Sioux Valley on Wednesday, May 19th.