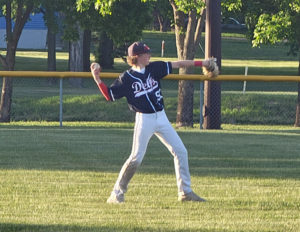 The Dell Rapids 16U season started with a double-header win over Flandreau on Thursday, June 3rd.  Dell Rapids won the first game 7-4 and then then second game 9-1.

As the visiting team in the second game, Dell Rapids wasted no time getting on the scoreboard.  Braden Fersdahl scored on a passed ball, Evan Nelson had a two-run single, and Joe Rechtenbaugh had an RBI double to give Dell Rapids a 4-0 lead after the top of the first inning.  Two more runs scored in the top of the second after an RBI single by Pankonen and RBI double by Jaton.  The final three runs came in the top of the fourth inning.  Pankonen had an RBI sacrifce fly, Smith had an RBI single, and Rechtenbaugh drove home another run on a ground out.  Dell Rapids lead 9-0 after four innings and won the five-inning game 9-1.