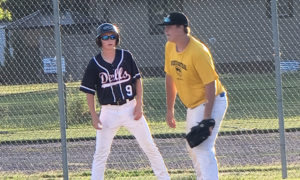 Quinn Carr had the hot bat for Dell Rapids.  Carr had three hits (one double and two triples) along with four RBIs.  Logan Donovan had two hits and an RBI.  Tad Tjaden had a triple and two RBIs.  Cooper Frost, Ethan Vanderwerf, and Grady Lamer all had a single.  Kenny Swanson and Lincoln Fersdahl both had an RBI.