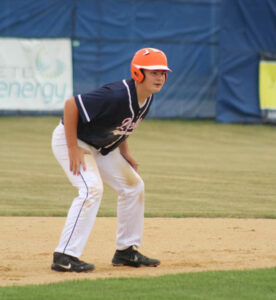 Dell Rapids 14U ended their regular season with another I-29 League win on Wednesday, July 7th.  Dell Rapids defeated Elkton on the road 13-5.

Dell Rapids scored seven times right away in the top of the first inning.  Quinn Carr and Lincoln Fersdahl both had RBI singles.  Brandon Schmidt had a two-run single, Logan Donovan had an RBI single, and Schmidt scored on an error for the early 7-0 lead.  Dell Rapids extended the lead when Donovan had an RBI ground out in the top of the second inning.

Dell Rapids will play in the Region 2A tournament July 14th through 16th in Northville.  Dell Rapids’ first game will be against Madison Maroon on Wednesday, July 14th at 11:00 a.m.