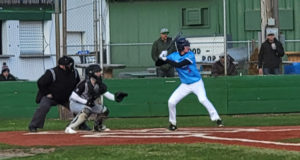 Neither Sioux Falls Christian nor the wind and cold could slow down the offense of Dell Rapids as they rolled to a 13-2 win over the Chargers in Renner on Monday, April 12th.

Seven players had hits for Dell Rapids.  Ruesink and Jaton both had two hits and an RBI.  Eastman also collected two hits.  Pankonen, A. Henry, Boechler, and Smith all had a hit and an RBI.  Ruesink got the win on the mound.  He pitched four innings giving up two runs, one earned, on four hits with five walks and six strikeouts.  Pankonen pitched the final inning striking out two batters.

Dell Rapids (3-3) will play Howard and W/WS/SC on Saturday in Madison.