Cancer nor coronavirus was able to stop this couple in love 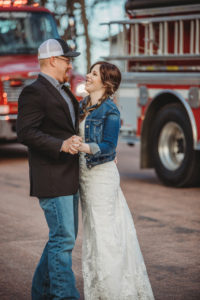 Like any engaged couple, Alec Hansen and Roxy Dede started to plan their happily ever after last year after dating for two years.

Alec was born and raised in Dell Rapids. He is the second born son of Chris and Melissa Hansen and has four siblings, Jake, Noel, Tate and Briar. Alec graduated from Dell Rapids St. Mary High School in 2013. Alec currently works with his dad at Dells Plumbing and is a member of the Dell Rapids Volunteer Fire Department.

Roxy was born and raised in Sioux Falls and relocated to Worthing with her mom, Cindy, and her sister, Tori. While in high school, Roxy endured severe anxiety and was pulled out of public school and completed her high school career at home. Roxy now has a degree in Medical Coding and has been working for Avera for the past six years.

Alec and Roxy met through Roxy’s sister, Tori, who is currently engaged to Dell Rapids local, Mike Jaskot. “Tori thought it would be a good idea to give Alec my Snapchat,” Roxy explained. “We started talking and went on our first date.” 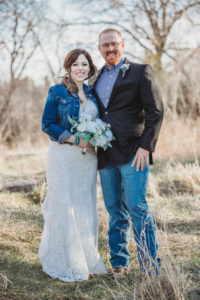 With the engagement came plans for their big day. Alec and Roxy had planned to hold their ceremony at St. Mary Catholic Church with all of their family and friends with a reception and dance to follow. Venues were set, plans were in place and then Breast Cancer struck.

“I found my breast cancer by accident,” Roxy explained. “One night, Alec and I were getting ready for dinner and I had a sharp pain and felt a lump. I called my doctor’s office right away and was told that it was probably a cyst, because I was too young to have cancer.” After a round of antibiotics, the lump was still present on Roxy. A biopsy was conducted. After waiting about a week for the results, Roxy was told that it was in fact, cancer.

“We didn’t really have a plan, we took everything day by day,” Roxy said. “One thing we did know is that we wouldn’t be able to afford a wedding and all of the hospital bills that would be coming.”

With the coronavirus, Roxy is not able to have anyone with her during her chemo treatments at this time. Roxy along with her doctors have decided on proceeding with a double mastectomy. Due to the virus, the date of the surgery has yet to be set. Roxy and Alec continue to take a little more precaution than normal due to her weak immune system. “I don’t want to end up in the hospital,” Roxy stated.

“I had a conversation with one of my nurses about how we planned to postpone the wedding,” Roxy explained. “She told me that we could still get married if we wanted. Hearing that from someone who deals with cancer patients everyday really made us realize that yes, we can still get married.” Alec and Roxy decided on a small wedding with family. Once her treatments are complete, the couple plans to have a reception/cancer free party to celebrate.

On Saturday, April 18, Alec and Roxy were united as husband and wife.

Roxy, along with her mom, sister and future sister-in-law were getting ready at her home for the big reveal that was to take place at the local fire station. Once the dress was in place, make-up and hair complete, Roxy arrived at the station to see Alec before the ceremony.

Alec, with eyes closed, faced Engine #2 while Roxy made her way to her groom. When Alec turned to view his bride, the heartfelt embrace was nothing short of magical. “When I saw her I thought she looked absolutely stunning – so beautiful,” Alec stated. “I thought about that Ed Sheeran song, ‘I don’t deserve this,’ but I am the luckiest guy in the whole world right now.”

After an array of photos of the couple and their families, it was time for the ceremony to commence. Alec and Roxy chose a beautiful location just west of the dam in Dell Rapids. Around 6:30pm, the ceremony began. For those who were not able to be in attendance, the couple had set up a Facebook group where Briar, Alec’s sister, livestreamed the ceremony. With one attendant on each side, Alec and Roxy exchanged their rings, vows and devotion to one another. After the introduction of the couple, Brendon Nelson, the officiant of the ceremony read the following words that were felt deeply not only by the couple, but for those in attendance:

“Now, on a more serious note these two have already been through some hard times and still are going through some with cancer, but she is beating it, and will beat it… We can’t forget either that she has some help from above with her Grandma Ruth walking every step of the way with her…. Alec’s Grandma Mina is up there probably sipping on a Miller Lite saying her grandson cleans up pretty good and has an amazing bride. Lastly, is Lorien. Roxy’s best friend is standing beside her, happy that she is marrying the love of her life. All of these people are not here today in person, you can’t see them, but they are here in their own way.”

After the ceremony was complete, the couple and their families made their way back to their vehicles to attend a celebratory supper at the newlywed’s home. Walking down the path to where the vehicles were waiting, friends of the couple lined the path keeping their distance with honking of celebration and congratulations.

Departing the dam area, approaching third street, another surprise was awaiting the couple. The Dell Rapids Fire Department had the trucks decorated with signs of congratulations and announcing “Just Married” to the community of Dell Rapids. With music coming from the fire trucks and lights radiating the sky, the department led the couple throughout town to celebrate their recent vows.

“We wanted to show them support and it was a little way for them to know we are all behind them and wish them well in their life together,” Fire Chief Dan Diez said. “We had some discussions when Alec wasn’t around and then we had some text messages and phone calls discussing the plan. His dad was our inside man keeping us informed of all the details.”

Once the couple was paraded home, the DRFD continued to play “When I say I do” by Matthew West so Alec and Roxy could have their first dance as husband and wife in the street in front of their home.

Congratulations to Alec and Roxy. May your marriage be full of love, health and a lifetime of happiness.