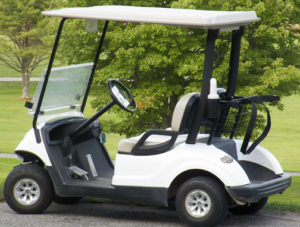 A report was given to the Dell Rapids City Council by City Administrator Justin Weiland during the regular meeting on Monday, June 7th that there have been a couple of instances in the last couple of years of serious accidents with golf carts with unlicensed under-aged drivers.

“I just felt that this has reached a critical point.  It has been brought to my attention in the past,” said Weiland.  “The number of complaints that have come my way, come city hall’s way, in the last two years regarding the use of golf carts on city streets, and mainly a problem with younger age kids that aren’t licensed drivers driving golf carts on city streets”.

The city council discussed a couple of directions to remind golf cart owners they need to license the cart with the city and to make sure the drivers have a valid driver’s license.  One idea was potentially having a letter or flyer describing the golf cart regulations emphasizing a licensed driver rule.  Another idea is to amend the current ordinance that might include stiffer penalties to dis-incentivize underage driving of golf carts.

The biggest thing the city is trying to do is create awareness of the issue that will hopefully end the trend of unlicensed drivers operating golf carts before a major tragedy happens.