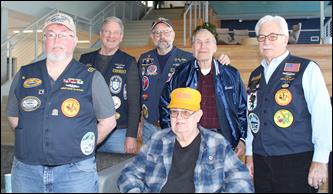 The boat is “state-of-the-art as far as technology goes,” said South Dakota Senator Mike Rounds, the keynote speaker at the Groton, Conn. ceremony.

Dakota State University’s programs of study center around state-of-the-art technology, so the institution hosted a watch party for the event. About 40 people, including DSU students, faculty, staff, and members of the community gathered at the Beacom Institute of Technology on the campus to watch the 75-minute ceremony. DSU President José-Marie Griffiths attended the ceremony in person, but offered a video welcome to the guests on campus.

Several guests were Navy submarine veterans, members of the United States Submarine Veterans Scorpion Base, including Mike Neuroth, aka “Captain Neutron.” He was brought to the ceremony by a staff person from the Dell Rapids Nursing and Rehab Center, where the 75-year old veteran currently resides.

Neuroth served on two submarines while in the Navy, working in the boats’ nuclear power plants. During his seven years of service, he traveled to the North Pole, and to South America, although in a submarine he admitted “you couldn’t see much.” In civilian life, he traveled the country working at nuclear power plants. “They needed people who knew what they were doing,” he said.

Neuroth is one of seven club members who traveled to Madison for the event. “It’s the camaraderie that keeps us together,” said Brian Schnerr, vice-commander of the Scorpion Base. “It’s awesome to be able to come to DSU for this,” he said. It’s also fulfilling to see South Dakota highlighted, he told KELO-TV in an interview, because “it’s a really great state.” Schnerr is from Hills, Minn.

Rounds, a member of the Armed Services Committee, noted the submarine’s impressive features and talented 132-member crew, which will play a significant role in the nation’s national security efforts.

“We are fiercely proud of the men and women who will serve on this sub,” Rounds said, the same sentiment felt for the two previous South Dakota ships. All three will share the same mission, he stated, to win wars, maintain freedom of the seas, and prevent war.

He said to the crew members, “God go with you and help this nation achieve peace through strength.”

Dakota State University (DSU) is located in Madison, S.D. Founded in 1881, DSU offers undergraduate, master’s, and doctoral programs through its colleges of arts and sciences, business and information systems, computer and cyber sciences, and education. DSU has a special focus on the development, application, implications, and impacts of computing, information technologies and cyber security in all areas of human endeavor. DSU has received multiple Center of Excellence designations in education, research and regional resource development from the U.S. National Security Agency and U.S. Department of Homeland Security. DSU is home to the Madison Cyber Labs (MadLabs), a cyber R&D hub with labs and institutes that explore and advance technology application, workforce development, business expansion, economic growth, and policy improvement across multiple disciplines and fields. For more information, contact mediarelations@dsu.edu, 605-270-3816, or visit the DSU website at dsu.edu.