Sioux Falls, South Dakota: The Eastern Chapter of the South Dakota Engineering Society presents awards annually to acknowledge the accomplishments of the engineering profession and recognize engineering achievements that capture the innovative and dynamic spirit of a profession dedicated to public service. The following awards were presented at the Annual Awards Banquet on February 23, 2019: 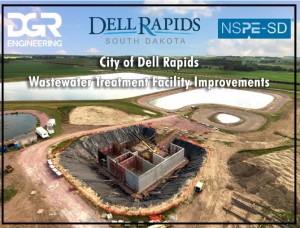 The City understood that discharge limits are only going to become more stringent in the future, and they needed a treatment system that was easily expandable and adaptable to meet these future limits. The City selected a sequencing batch reactor (SBR) because it met these requirements and set Dell Rapids up for future growth and success.  The overall project construction cost was nearly $5.8 million.

The Big Sioux River Basin in eastern South Dakota has experienced repeated flooding in recent years. In 2014, a major flood in the lower basin revealed shortcomings in understanding and predicting flood-event behavior. In 2016, the State of South Dakota commissioned the development of the Big Sioux River Flood Information System.

The Flood Information System is a two-part web platform including access for the public and flood-response teams. The first part is a public site http://www.bigsiouxfis.org/ with access to stream conditions at over 50 locations throughout the Big Sioux River Basin and a library of over 8,000 inundation maps, representing flood scenarios for five different communities. The second part is a site reserved for state and community officials and includes access to real-time flood inundation forecasts. When flood events are predicted, the hydro-logic output is run through models and predicted inundation maps are loaded to the web platform.

The Flood Information System provides the public with an understanding of potential flood risks and gives flood-response teams accurate information for decision making during flood events.

Already in 2018, the system has proven its value during two separate events near North Sioux City. As significant amounts of rain fell over parts of the basin upstream, there was a lot of uncertainty in the severity of flooding that may occur. The Flood Information System predicted less-severe impacts than previous forecasting methods. Flood response managers had the confidence to hold off any drastic measures well in advance. The Flood Information System predictions held true, accurate to within 0.1 feet of observed flood stage.

The total project cost was $1.3 million.

Young Engineer of the Year Award – Krista May, PE

Lance Weatherly is a Principal Engineer for the City of Sioux Falls providing engineering support for the Public Works Stormwater division.  Lance is responsible for the planning and execution of the $44 million Stormwater Capital Improvements Program to improve neighborhoods and promote comprehensive growth.  Lance’s professional career has spanned 15 years in the private and public sectors in Eastern South Dakota.  Lance has Bachelor and Master of Science degrees in Civil Engineering from South Dakota State University and a Master of Business Administration from the University of South Dakota.  Lance obtained his professional engineer licensure in 2008 and is licensed in South Dakota.    Lance is active in the South Dakota Engineering Society, having served in different leadership roles and is the current president of the Eastern Chapter. Lance enjoys giving back to personally and professionally to the Sioux Falls community and mentoring the upcoming generation of professional engineers.  Lance enjoys spending time with his family and traveling to explore new cultures.