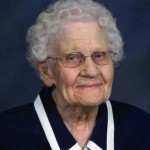 Anita M. Geraets, 97, of Dell Rapids passed away on Sunday, April 22, 2012 at the Dells Nursing and Rehab Center. Mass of Christian Burial will begin at 11:00 a.m. on Wednesday, April 25, 2012 at St. Mary Catholic Church, Dell Rapids.Fr. Anthony Urban will be the celebrant. Interment will be in the St. Mary Cemetery, Dell Rapids.  Visitation will begin at Noon on Tuesday, April 24, 2012 at Kahler Funeral Home with the family present at 3:00 p.m. and the Christian Wake Service beginning at 4:00 p.m. Funeral arrangements were under the care of Kahler Funeral Home. www.kahlerfh.com.

Anita Marie Odenbrett was born on August 4, 1914 on a farm Northwest of Dell Rapids, SD, the daughter of William and Helena (Endlein) Odenbrett. She attended rural schools near Dell Rapids and Colman. She moved with her family to Flandreau. Anita married Frank Geraets on May 8, 1940 at Flandreau. The couple farmed south of Colman and in the Dell Rapids area until 1959 when they retired. She was employed at W.R. A., mended books at the Flandreau Library, worked at the Dell Rapids Bakery for 10 years and cooked at St. Mary Schools. Frank died on November 18, 2006.

She was preceded in death by her parents, three sisters and three brothers.  She was a member of St. Mary Catholic Church and Altar Society. She was a past officer with the Altar Society and was an oblate of St. Benedict since 1958.