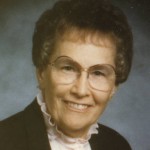 Susie Donaldson, 89, of Dell Rapids passed away suddenly on Saturday, May 26, 2012 at the Avera Heart Hospital in Sioux Falls. Her funeral service will be held on Tuesday, May 29, 2012 at 1:00 p.m. in the Lutheran Church of Dell Rapids Chapel. Interment will be in the Dell Rapids Cemetery. Visitation will begin at 2:00 p.m. on Monday, May 28, 2012 at Kahler Funeral Home and the family will be present to greet friends from 2:00 to 4:00 p.m.  To leave condolences please vist www.kahlerfh.com.

Susie was born on September 22, 1922 in rural Lyon County, IA.  She grew up in Worthington, MN.  In 1940, she married Melvin G. Uecker and they moved to San Diego, CA, where Susie got a job at the Douglas Aircraft. In 1943, they bought a farm at Sherman, SD.  They had two sons, Douglas W. and LeRoy J.  Susie spent most of her young married life as a homemaker for her family.  After the boys had grown, Susie went back to work at Campbell’s Soup and Raven’s Industry as a seamstress.  In 1974, they sold the farm and retired to Dell Rapids, SD.    Shortly thereafter, Melvin passed away in 1976.

Susie was a member of the Lutheran Church of Dell Rapids.  She enjoyed taking care of her grandchildren, played ball with them, took them swimming, played cards and, of course, the Dairy Queen was always a treat.  She loved bowling and took many bus tours with her friend Fern LeBrun.
In 1995, Susie married Everett Donaldson and they made their home in Dell Rapids, SD.  This expanded her family to include two step-daughters and three step-sons.   To occupy their time, she became the president of the Dell Rapids Senior Center for many years.

BLESSED BE HER MEMORY