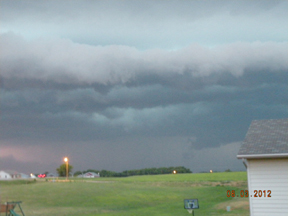 Severe storms passed through much of the eastern half of the state yesterday, August 3rd, but most of the damage left by the storms was north and west of the Dell Rapids area.  Dell Rapids was in a Severe Thunderstorm Warning from about 8:45 p.m. to 9:15 p.m., but no damage has been reported in the area.  Just to the west in Colton, storm spotters reported wind gusts of 65 mph and tree/large branches down in the area.  The Madison area had reports of wind gusts of near 80 mph.  Further to the north and west, the Castlewood area had storm damage of uprooted tress and power lines down.  Castlewood residents did have power restored around midnight.  In the northeast part of the state where the storms started, Redfield, Northville, Mellette, Conde, and Doland areas all had reports of 70-80 mph winds and wind damage.  There was a reported tornado in the Conde area by a storm spotter.  Most of the major hail damage was reported in a path from Mobridge to Bowdle area.  The storms left the Dell Rapids area with just a little over a half-inch of rain. 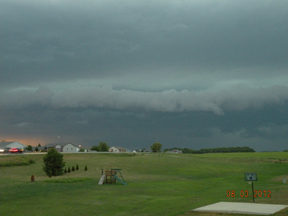