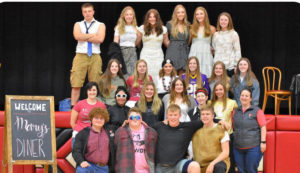 Dell Rapids St Mary performed the comedic plays, Check Please and Check Please: Take 2, as two acts on Saturday, April 24th and Sunday, April 25th.  It was about two people that go on a string of dates, in hopes of finding a girl/boyfriend, but they find out that dating is a lot harder than they anticipated. Every date the main characters go on have some crazy quirk. By the end of the first act, the two main characters go on date (later it’s implied that they do become a couple). Then, at the beginning of the second act we find out that they have broken up, and then they are back to dating. By the end of the play, they run into each other again and decide to at least hang out as friends.

Play director Jennifer Riegel said, “It was so much fun working with the students! As a teacher in the classroom, you see them in one light, so it was so fun to see them a new light—and literally take on new personas!”.

Seventh graders through seniors at Dell Rapids school performed the 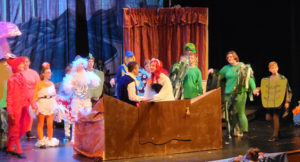 musical The Little Mermaid.  They put on four shows over the course of three days on Friday, April 23rd through Sunday, April 25th.  Sharon Mitchell and Robert Michalscheck directed the musical.

“So many people put hours of work into a successful production. It was great to see 60 plus students from grades 7-12 come together for this show. I appreciated (and I know they did) the large support they got from their community shown by the record numbers of audience members in attendance. A great time was had by all!” said Mitchell.

Both plays received nothing but great reviews from the public!