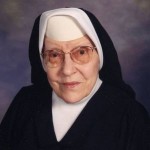 Sister Gertrude Nemmers, 97, a Sister of the Presentation of the Blessed Virgin Mary, died March 7, 2013, at Presentation Convent, Aberdeen, SD.

The Mass of Christian Burial for Sister Gertrude will be Monday, March 11 at

Burial will be at the Sacred Heart Cemetery with Spitzer-Miller Funeral Home, 1111 S. Main Street, in charge of arrangements.

Clara Agnes was born March 15, 1915 in Granville, IA to Magdelena (Roeder) and Joseph Nemmers. She began her grade school education in Granville, IA and then in 1924 her family moved to Dell Rapids, SD where she completed her education through grade ten at St. Mary’s Grade and High School. She entered Presentation Convent on August 25, 1932 and made her first profession of vows on July 9, 1935. She became a registered X-Ray & EKG Technician in 1940. Sister Gertrude ministered at Queen of Peace (St. Joseph Hospital), Mitchell, McKennan Hospital in Sioux Falls, and St. Luke’s in Aberdeen, SD (1945- 1960). She also ministered at Presentation Children’s Home in Sioux Falls from 1965-1966. She managed the altar bread department at the convent in Aberdeen from 1966-1989. Sister Gertrude was caregiver for family members, Arnold in Tucson, AZ and Florence Ginsbach, Dell Rapids, SD, from 1989 until 2007.

Sister Gertrude resided at Presentation Convent from 2007 until her death. She will be remembered for her great sense of humor and when asked what her position or profession was she would reply, “Keeping my eye on the eternal goal.” She enjoyed making birthday and feast day cards, delighting the recipients and then eagerly awaiting their responses.