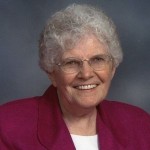 The Mass of Christian Burial for Sister Del Rey will be Monday, December 3, at 11:00 a.m., in Blessed Sacrament Chapel, Presentation Convent, Aberdeen, SD. A Scriptural Wake service will be Sunday, December 2 at 7:00 p.m. in the Blessed Sacrament Chapel. Visitation is from 4:00 to 7:00 p.m. on Sunday.  Reverend John Lantsberger and Reverend David Krogman with be the celebrants.  Burial will be at Sacred Heart Cemetery with Spitzer Miller Funeral Home, 1111 S Main, Aberdeen, SD, in charge of arrangements.

Barbara Joann was born November 13, 1935 on a farm near Wessington, SD, to Elizabeth (Matthews) Thieman and Henry Thieman. She attended elementary and secondary schools in Wessington and was valedictorian for both. She entered Presentation Convent January 1, 1955 and made her first profession of vows August 10, 1957.

After teaching high school in Mitchell and Dell Rapids, she assumed the ministry of formation of new members for the Presentation Sisters. Lay people in Aberdeen learned of her work with the Presentation community and asked her to provide her services of spiritual formation to them as well. This led to Sister Del Rey beginning a full-time ministry to adults of various faith backgrounds in spiritual direction and retreat work.

In 1982, Sister Del Rey was elected vice president of the Presentation sisters. Upon completing her term in office, Sister moved to Sioux Falls and continued her ministry of spiritual direction and retreats, and ecumenical ministry.

Sister Del Rey is survived by her community of Presentation Sisters; 2 sisters, Jan Almquist, Minneapolis, MN, Mary Neal, Salem, OR, and nieces and nephews. Sister Del Rey is preceded in death by her parents, Henry and Elizabeth Thieman.

Memorial preference is to the Presentation Hispanic Ministries.  www.spitzerfuneralhome.com