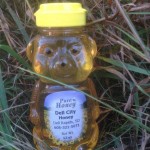 Gov. Dennis Daugaard has proclaimed September as Honey Month in South Dakota.  South Dakota ranks in the top five honey producing states.  Last year, 17 million pounds of honey were produced in South Dakota with a value of $33 million.  Dell Rapids has it’s own beekeepers that produce and sell honey, Dell City Honey.  This year will be their third year in business.

Beekeeper David Jastram explained the process of how they make their honey.  He said that he bees collect the nectar and convert it into honey for storage in the winter.  After the moisture content is at a certain level, they are able to harvest the honey.  They will cut the wax cells open with a knife and use a stainless steel extractor to pull the honey out of the cells of the honeycomb.  After they have collected the honey, they will lightly strain it, and Jastram said that no heat is applied to the honey at all.

Jastram said, “The only reason that this is not called ‘organic’ honey is because there is no promise that while the bees are collecting nectar they don’t get into any pesticides or other chemicals.  But this is as natural as honey can be.”

Jastram also said, “It’s important for people to identify where their honey comes from.  There are lots of Chinese and South American honey imports.  There is also ‘funny honey’ which is made with high fructose corn syrup.  Our honey is 100% South Dakota honey.”