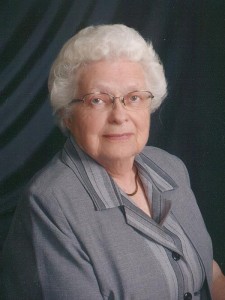 Funeral services will begin at 1:00 PM Friday, September 7, 2018 at the Lutheran Church of Dell Rapids Chapel. Burial will be in Dell Rapids Cemetery.

Pat met William (Bill) Langner while they were working in Aberdeen and were married there on April 1, 1950. Pat and Bill lived in Rapid City, Aberdeen and Omaha finally settling down on the farm near Dell Rapids. She cared for their four children and helped with the farm and sheep operation. Pat enjoyed crafting, sewing, gardening and attending farm auctions with Bill. Pat was a member of the Dell Rapids Garden Club and Dell Rapids Lutheran Church and served on altar guild and kitchen committees.

Pat was preceded in death by her husband, parents and siblings.

The family requests memorials are sent to the Lutheran Church of Dell Rapids Chapel Fund.