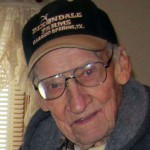 Lowell “Whitey” Kuper, 85, of Dell Rapids passed away on Wednesday, May 9, 2012 at the Dells Nursing and Rehab Center. Mass of Christian Burial will begin at 10:30 a.m. on Saturday, May 12, 2012 at St. Mary Catholic Church, Dell Rapids. Interment will be in the St. Mary Cemetery. Visitation will begin at noon with the family present at 4:00 p.m. and the Christian Wake Service will begin at 5:00 p.m. on Friday, May 11, 2012 at Kahler Funeral Home. To leave condolences please visit www.kahlerfh.com .

Lowell “Whitey” Kuper was born on March 11, 1927 at Marvin, SD, the son of Ben and Mabel Kuper. He grew up and attended school at Marvin and lived there until 1943 when he moved to Sioux Falls, SD. He worked at Gamble Skogmo until 1952 when he worked for Ray Syverson Tile Company. He retired in 1989. Lowell married Bette Bunkers on January 21, 1952 at St. Mary Catholic Church in Dell Rapids. They lived most their life in Dell Rapids.

He enjoyed hunting and fishing with his buddies and was a master gardener. He played the guitar and was in various bands around the area. He taught each of his children how to play the guitar.

Whitey was preceded in death by his brother and four sisters.