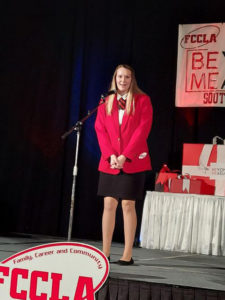 Dell Rapids student Rylee Rinehart was recently named the South Dakota FCCLA president and was installed in that position during the closing ceremony of the state’s FCCLA Leadership Conference recently held in Sioux Falls.

Not only was Rinehart named the president for the 2021-2022 year, she was also recognized for completing all five modules of the “Power of One” national program and will be representing South Dakota in Nashville at the FCCLA Nationals in June.

“I have been in FCCLA for five years now and never would I have guessed to be president. When I first joined and saw the president at the time out on stage, I looked up to them and thought how smart they must be and would never have imagined what my future would hold. I ran for Region V President this year and was so unbelievably proud of myself and couldn’t wait for state FCCLA. When I ran for president of the state, the other candidates were so nice and friendly.  I was so happy to be part of their team.  When I went in for my interview, I went in confident because I knew no matter what position I got I would be happy! Then they announced my name for president, and I was in shock that I would be president for the whole state. FCCLA has changed my life in such an amazing way, and I’m so honored to be your 2021-2022 FCCLA State President!” said Rinehart.

Rinehart was not the only Dell Rapids student recognized at the South Dakota FCCLA Leadership Conference.  Faithe Larson just ended her term as the state’s vice president and also qualified for the national competition in her STAR Event category of Fashion Construction.  Kyra Wajer received a gold rating and top superior in the Repurpose and Redesign category.  Veronica Vanderloo received a silver rating in the Food Innovation category and was one of two individuals from across the state to receive the Presidential Award.

The Dell Rapids chapter received a gold rating for the Merit Chapter Award for their overall accomplishments of projects and activities during the year.