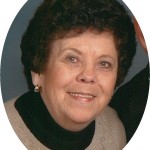 Judith M. Vortherms, 68, of Dell Rapids, passed away Saturday, July 14, 2012 at her home. Mass of Christian Burial will be held on Wednesday, July 18, 2012 at 10:30 a.m. in St. Mary Catholic Church, Dell Rapids, SD with interment to follow at the St. Mary Cemetery. Visitation will be from 2:00 to 5:00 p.m. Tuesday at Minnehaha Funeral Home in Dell Rapids and will resume at 6:00 p.m. in St. Mary Catholic Church with the family present. A Christian Wake Service will begin at 7:00 p.m. in the church.

Judith Mae Roti was born on October 15, 1943 in Canton, SD, the daughter of Myron and Minnie Roti. She graduated from Canton High School in 1962. She was married to Art Vortherms on August 22, 1964 and they began their life together on a farm west of Dell Rapids. Along with helping out on the farm, Judy worked at First National Bank, Gannon Bookkeeping, Terrace Manor, Lodmell-Schaefer and Denny Gaspar Ford, retiring in 2004.

Judy’s family was everything to her and some of her favorite times were spent hosting family suppers on Sunday nights, with her grandchildren playing baseball in the backyard. She also enjoyed attending all of their many activities and never missed a chance to take pictures.  Judy was an avid Minnesota Twins baseball fan and rarely missed watching a game.