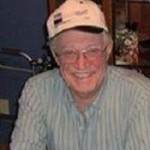 Jerry was born July 1, 1943 in Chester, SD, the second child of Hjalmer and Wilhelmina Wickre. He graduated from Colton High School in 1961 and went on to electrical school. He spent most of his career in various electrical jobs and retired from Dakota Supply Co in 2005. On February 27, 1965 he married Carolyn “Carol” Mergen at St. Peter’s Church in Colman, SD. Carol and Jerry were blessed with two children, Debra Boyle from Lone Tree, CO and Steven Wickre, from Colton, SD.

He was preceded in death by his father, Hjalmer Wickre in 1982 and his wife, Carol Wickre in 2004.

He was an avid antique tractor collector and loved the restoration process of it all. He not only enjoyed doing it for himself but also loved doing it for others in the community. In addition, he was a board member of Prairie Village Madison for 30 years and honored for his service by being named Grand Marshall this past August during Jamboree Days. He was incredibly talented and passionate about music playing by ear and had never had a lesson. He played several instruments including guitar, piano and accordion.

Mass will be Monday, December 23, 2013 at 10:30am at St. Joseph the Workman Church in Huntimer. Visitation will be from 3-5:00 PM Sunday at the Minnehaha Funeral Home, Colton.