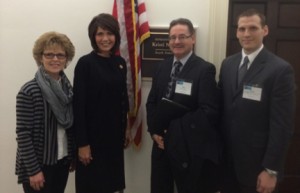 During the 2014 NFDA Advocacy Summit, Nohava met with meet with Sen. John Thune, Sen. Tim Johnson, and Rep. Kristi Noem to discuss the Federal Trade Commission (FTC) Funeral Rule, a federal consumer protection law. The Funeral Rule has been interpreted as only applying to funeral homes; NFDA members argued that the law should be updated to include all sellers of funeral services and merchandise, including cemeteries, crematories, internet sellers and retail stores.

When the Funeral Rule was first promulgated in 1984, the funeral home was the primary source of funeral goods and services for the funeral consumer. Today, funeral consumers have a much greater variety of funeral service and merchandise sellers to choose from, including cemeteries, crematories, internet sellers and retail stores. Consumers who purchase funeral goods and services from somewhere other than a funeral home are not afforded the protections of the Funeral Rule, putting them in a vulnerable position.

To address this situation, NFDA members, like Nohava, feel that Congress should pass legislation that would require the FTC to update the Funeral Rule to reflect the current for-profit marketplace options for consumers and afford them the same protections they have under the Funeral Rule when dealing with funeral homes.

“Our funeral home staff has an unwavering commitment to the families we serve and our profession,” said Nohava. “I was proud to have the opportunity to meet with our elected senators and representatives in Washington, D.C., to help them understand the importance of updating federal consumer protection regulations.”

Minnehaha Funeral Home was founded in 1928 and is a cooperative owned by hundreds of shareholders in our communities. Over the years the funeral home has expanded to four locations in Minnehaha County. Nohava has been a funeral director with Minnehaha Funeral Home since 2005, and is a licensed funeral director/embalmer in South Dakota, Minnesota, and Iowa. He is also a member of the US Department of Health and Human Service’s Disaster Mortuary Operational Response Team (D-MORT) which responds to mass fatality disasters across the country.

Nohava is also a certified firefighter and Emergency Medical Technician with the Garretson Fire Department, and Garretson Community Ambulance. He is a past Fire Chief and current Assistant Fire Chief of Garretson, and has been a South Dakota Certified Fire Instructor since 2007. Doug is married to Karly Hegge. They have two daughters, Kalyce and Amity.

About the National Funeral Directors Association

NFDA is the world’s leading and largest funeral service association, serving 19,700 individual members who represent more than 10,000 funeral homes in the United States and 39 countries around the world. NFDA is the trusted leader, beacon for ethics and the strongest advocate for the profession. NFDA is the association of choice because it offers funeral professionals comprehensive educational resources, tools to manage successful businesses, guidance to become pillars in their communities and the expertise to foster future generations of funeral professionals. NFDA is headquartered in Brookfield, Wis., and has an office in Washington, D.C. For more information, visit www.nfda.org.