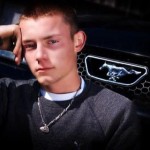 A fund has been set up for Dylan Lesselyoung at Wells Fargo Bank in Dell Rapids.  Lesselyoung was severely injured in a roll-over crash on Tuesday, October 8th.  He was ejected from the vehicle when it rolled over.  His neck broke in several places in the accident.  Currently Lesselyoung has no feeling or movement below the shoulders.  He has undergone two surgeries so far in Sioux Falls, but now needs to be transferred to Craig’s Hospital in Denver, Colorado.  Craig’s Hospital specializes in rehabilitation of spinal cord injuries.  He could be in Denver anywhere from three to nine months.  Lesselyoung’s mother, Tracy Fodness of Dell Rapids, will be traveling with him to Craig’s Hospital and will be staying with him while he recovers.

Donations can be made to the fund.  STAY STRONG D.M.L bracelets are also for sale for $5.00 at the home football game tonight, or they can be purchased from Kassandra Steinke (605-212-6939).  The monies in the fund will be used to help cover the transportation cost to have him flown in an air ambulance and for anything he may need during his rehabilitation.

Lesselyoung is a graduate of Dell Rapids High School and just recently started college in Mitchell.