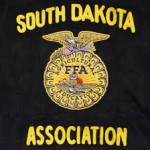 Members of the Dell Rapids FFA chapter participated in the District 7 Leadership Development Events on Tuesday, November 23rd in Hartford.

TenEyck was also selected as the District 7 Vice President.