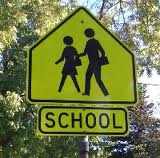 The Dell Rapids school year gets underway on Monday, August 20th, and motorists are being reminded of the 15 mph speed limit in school zones.  Big Sioux Media spoke with a representative from the Minnehaha County Sheriff’s Department and he would like to remind motorists to use extra caution in school zones and to leave for your destination a little earlier than normal allowing for the slowdown and the number of cars and congestion around the schools.  School age children get extra excited about the start of a school year, and often times are not paying attention while crossing streets or exiting cars to get onto the school grounds.  School zones are typically patrolled more heavily for a few weeks for safety purposes.