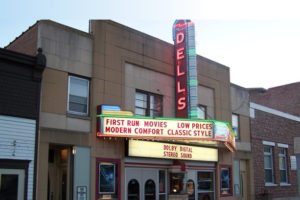 The Dells Theatre in Dell Rapids has been sold to an employee of the theatre. In a joint announcement, Logan Luxury Theatres Corporation said it has sold the theatre to Brian Anderson, of Dell Rapids, who has been a long time employee of the company. Final papers will be signed, and Anderson will take over operation of the area landmark on February 1.

Anderson said, “My wife and I are thrilled to purchase the theatre and continue bringing Dell Rapids and the Sioux Falls area new movies in a classic theatre with state of the art projection and sound. We want to continue the friendly, hometown feel of the theatre.”

Anderson has an extensive show business background having been a child actor in TV shows such as “Saved by the Bell: the College Years” and “Full House” before his family moved to South Dakota. He and his wife met while working at the Century Stadium Theatre in Sioux Falls. He later went to work for Logan Luxury Theatres at their Luxury 5 Cinemas in Mitchell while attending Mitchell Technical College.   He has worked for the past 10 years as a Relief Manager at the Dells Theatre while working fulltime in the IT Department of Sanford Health. He will continue at Sanford while operating the theatre. Anderson will retain theatre’s staff.

Jeff Logan, president of Logan Luxury Theatres headquartered in Mitchell, said, “We are confident Brian will maintain this beautiful building and operation to the highest standards. We love the Dell Rapids community and want to thank everyone for their tremendous support over the past 22 years. The theatre is an art deco treasure that has been a labor of love for us. Brian lives in Dells Rapids and will be able to work even closer with the community to serve it better.”

The Dells Theatre attracts a large audience from Sioux Falls and a wide radius to its unique architecture, prices and service. It was built in 1938 having been designed by noted theatre architect Perry Crosier of Minneapolis.

Logan said, “It was a beautiful building that was like walking into a time machine to the glory days of Hollywood. In our restoration we tried to enhance the original décor with the thought, how would Crosier have designed this building if he had a larger budget and the theatre was to be located in a suburb of a larger city such as Minneapolis or Chicago.”

Logan updated all the projection and technical aspects of the theatre, enlarged the lobby and installed new seats and a concession stand. He brought in decorative moldings from Chicago theatres of the same vintage and period signage removed from his theatres in Mitchell and Huron.

The theatre has gained national attention being featured on Small Business Saturday on NBC–TV’s “The Today Show” and hosting the Midwestern premieres and stars of “Walt Before Mickey”, the live action version of “The Little Mermaid”, and “He Leadeth Me.” The theatre also hosted the Library of Congress film festival for South Dakota in 2000 that included an appearance by James Earl Jones.