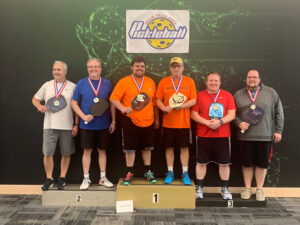 The Avera Pickleball Classic was held the weekend of March 18th through 20th in Sioux Falls at the Avera Human Performance Center with participants traveling from all over South Dakota and neighboring states. It just so happens a few folks from Dell Rapids made the trip to Sioux Falls to compete in this year’s classic. The classic was made up several divisions including singles, doubles (both men and women), and finally mixed doubles with a different skill level at each division ranging from 3.0 to 4.5 depending on where tournaments officials believe a participant should be playing.

Dell Rapids was represented in almost each division. The duo of Zach Dishman and Jody Schumaker entered the Men’s Doubles (under 60) 3.0 division with a lot of success. The tournament format had the duo playing five games of pool play, which they finished with a 5-0 record, earning convincing wins of 15-, 15-1, 15-8, 15-4, and 15-5 against their foes. The duo entered as the number one seed in bracket play and finished bracket play with a 3-0 record winning the gold medal, defeating a team from Fargo, ND, with scores of 11-1 and 11-3.

Other participants from Dell Rapids included Jeff Fiegen who entered the Men’s Doubles (over 60) 3.0 division. Jeff and his partner Dan Dellman finished the tournament with a 1-3 record and missed out of the medal rounds. Fiegen also participated in Mixed Doubles 3.0 division with Dianna Donkerscot and finished with a record of 4-4 before being eliminated in bracket play, just missing the medal stand. Finally, Dishman entered the Men’s Singles 3.0 and finished with a 0-4 record and also competed in Mixed Doubles 3.0, with his partner Sanne Edmonson.  They finished with a 3-4 record, missing out of the medal rounds.

The final participant from Dell Rapids was Jeremiah Fiegen, who participated in Men’s Doubles (under 60) 3.5, with his partner Tyler Bowen.  They finished with a record of 2-4, missing out of the medal rounds.

The Dell Rapids Pickleball group is currently playing at the Dell Rapids Elementary School gym on Saturday mornings from 8 am until noon, and again on Sunday evenings from 6 pm until 8 pm. Games are also played at River Community Church on Monday evenings from 6 pm until 8 pm and at the same time on Thursdays. With spring just around the corner, look for the group down at the City Park tennis courts. Come on down and play or learn to play. They have several people who are more than willing to teach new folks the game of pickleball.  Equipment is provided and there is no age limit. The group has had kids as young as 11 and some other kids over the age of 70. Come on down and join the fun!