The South Dakota FCCLA (Family, Career, and Community Leaders of America) Meeting was held on April 22-24, 2012, in Sioux Falls.  Over 1500 members, advisors, and parents and chaperones were in attendance with over 1100 members from across the state from 70 chapters competing in various STAR Events.  The theme of the meeting was “Extreme Makeover FCCLA”.  There were three general sessions.  Jamie Utt was the keynote speaker for the first general session whose address centered around his theme “Are You the 100th Monkey?”   During the second general session Children’s Miracle Network gave a presentation with families who had received help from CMN while a family member was  hospitalized or being treated.   SD FCCLA chapters each made donations to CMN since it was chosen as their state project for the year.  Various workshops were held throughout the day on Sunday and Monday. 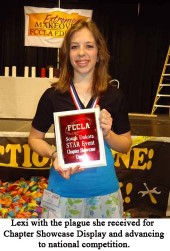 April Erdman from Dell Rapids who served as the State Vice President of Recreation ended her term during the installation ceremony held at the last general session.  She and the other 9 state officers were responsible for organizing and presiding at the meeting.  She also had the responsibility to organize the Talent Show.  Morgan Kistler and Stephanie Dennis each performed a solo during this program.

The Dell Rapids FCCLA Chapter received the Merit Chapter Award for their overall accomplishments for the year.  They were one of the eleven chapters who received this award.  They were also recognized as the second place chapter for community service.  They received recognition for their contributions to our state project which was Children’s Miracle Network.  Branden Jastram was recognized for completing all 5 modules of the Power of One program.  He will also receive recognition at the national level for this accomplishment.

Individuals who received a Gold Rating and Top Superiors were April Erdman in the Recycle and Redesign category; Lexi Snyder in the Chapter 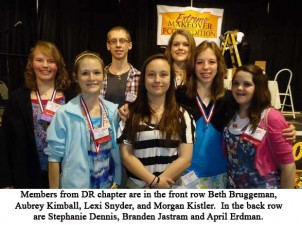 into the runoff competition for nationals; and Stephanie Dennis in the Recycle and Redesign category.  Aubrey Kimball and Morgan Kistler received a Gold Rating on their Illustrated Talks.  Branden received a Silver Rating on his Job Interview.

During the last general session it was announced that Lexi Snyder was the winner in the Chapter Showcase Display category.  She will now be representing South Dakota in her event during competition at the national FCCLA meeting in July.

Beverly Rieck is the local advisor for the chapter.