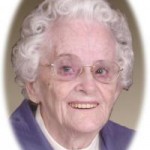 Delight Marie Pederson was born June 16, 1909, at Dubuque, IA, to Nick and Emma (Dunne) Bechen. She moved with her family to South Dakota in her early childhood. She enjoyed her life on the farm, going to the neighborhood dances where her dad taught her to dance and she later taught her husband and children. She attended country school and high school in Rutland. On June 16, 1927, she married Elwyn Pederson at Pipestone, MN. To this union six children were born. Delight lived in several towns in South Dakota including Egan, Colman, Lake Campbell and Medary. When World War II began they moved to Douglas and Wichita, KS where Elwyn worked building the B-29 Bomber. After World War II, they returned to South Dakota, living in Colman and later Egan. They moved to Dubuque, IA and in 1999, Delight moved to Mitchell to be close to her children.

Delight did many interesting things during her life from running a cream station, working at the rest home in Flandreau, the Elks Lodge in Dubuque, IA and being a care giver to family members. Delight enjoyed sewing, crafts and baking angel food cakes, spending time with family, grandchildren and great-grandchildren and traveling from the Holy Land to Alaska and points in between.