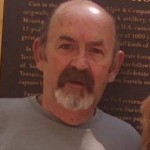 Dale Eugene Babcock, age 65, passed away Sunday, May 13, 2012 at the VA Medical Center in Sioux Falls. Memorial service will begin at 1:00 PM Wednesday, May 16 at George Boom Funeral Home, Sioux Falls. The family will be present to greet friends for visitation from 6:00pm to 8:00pm on Tuesday, May 15, at the funeral home.

Dale was a longtime employee of Franklin Foods.