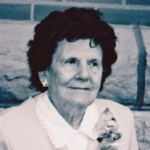 Bessie Adelia Bendt was born on Feb. 11, 1921 to Earl and Alma (Quam) Walker in Kenneth. She grew up and attended school in Luverne through the eighth grade. She later completed her high school education, earning her GED in 1979.

On May 18, 1942 she married Fabian Hollaren in Luverne. Following their marriage they lived in Rock Rapids, Iowa and Luverne for several years.

On June 6, 1965 she married Charles “Ole” Bendt in Sioux Falls, S.D. The two settled in Pipestone where they stayed the remainder of their lives. In 2008, Bessie moved to Falls Landing in Pipestone where she lived for six years. In late January of this year, Bessie entered the Pipestone County Hospice House.

She was preceded in death by her husbands, Fabian Hollaren and Charles “Ole” Bendt; her son, Michael Hollaren; her great-granddaughter, Montana Honermann; three brothers, Warren, Billy and Myron and two sisters, Alice and May.