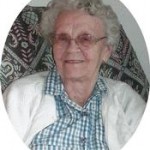 Anna Frevik, age 92, formerly of Garretson, passed away on Thursday, June 14, 2012, at the Dells Nursing and Rehab Center in Dell Rapids. Funeral services will begin at 11:00 A.M. Monday, June 18, 2012, at Zion Lutheran Church in Garretson, with interment at the Sunset Rest Cemetery at Rushmore, Minnesota. Visitation with the family present will be from 3-5:00 P.M. Sunday, at the Minnehaha Funeral Home, Garretson.

Ann was born on October 4, 1919, at Little Rock, Iowa, to Cornelius and Anna (Modder) Schol. After receiving her education in Elgin Township, she stayed at home to help with raising her six brothers and sisters. She married Harry Renken in 1939. After their marriage they lived in Ocheydan, Iowa, for two years until moving to a farm north of Little Rock.

Following Harry’s death in 1964, Ann worked in Worthington until going to work for Justin Frevik as a housekeeper. She took care of Justin’s children, and after a year, Justin and Ann were married by Rev. Haygeman on August 7, 1965. Justin and Ann lived and farmed north of Sherman. During this time, Ann was an active housewife, having a large garden, canning, keeping house, embroidering, and helping Justin with hauling loads of corn at harvest. Through the years, she and Justin enjoyed dancing, playing cards, bowling, and attending their grandchildren’s activities. Ann was a member of Zion Lutheran Church in Garretson where she was active in circle and ladies aid. Ann and Justin moved in to Garretson in 1985. They lived in Garretson until February 2008, when they moved to Orchard Hills in Dell Rapids.