“Moe, 20 years is amazing.  20 years of doing anything is amazing, but 20 years of being a positive influence on kids, that’s tough to beat,” said Mike Henriksen.

Henriksen’s opening remarks set the celebratory mood on Sunday, August 3rd, at Dell Rapids City Park for Moe Lickteig’s 20 years of Jr. Football coaching celebration.  Lickteig was surprised by family and friends with a party in the park to honor him.

“I don’t do it for this…I don’t.  I do it for our program,” said Lickteig at the beginning of the evening.  Throughout the evening, family, friends, and former players enjoyed spending time thanking Lickteig for all the years he has spent coaching Jr. Football in Dell Rapids.  A thank you banner with hand-written thank yous was presented to Lickteig.  The rest of the time was spent reminiscing on past teams and viewing team photos.

Lickteig has no sons of his own, but his daughter approached him with a piece of paper about South Dakota Jr Football with an interest in playing 20 years ago.  He allowed his daughter to play, and noted that she ended up being one of his best blockers over the years.  Lickteig helped coach that first year, and mentioned that all the other coaches were 4th-grade dads.  They looked at him to take over the next year, and he’s been coaching a team of 3rd and 4th-graders ever since.

“The kids.  The kids.  The kids.  The things they do, the things they say, the hard work they give you, that’s what I do it for,” said Lickteig.  His coaching philosophy over the years has been very simple.  He says, “Play hard and have fun.  You don’t want to do that, you might as well stay home.  Play hard and have fun.  The rest is going to fall into place.  Johnny wants to be a quarterback…well…Johnny you are going to have to try harder.  It just don’t come overnight.  You gotta work.  And they do.  It’s been that good.” 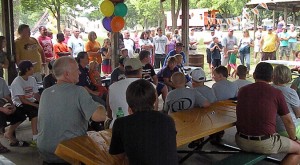 Lickteig also made it a point over and over again throughout the night that it’s not all about him.  “It’s not all because of me.  It’s my assistant coaches.  It’s my family that has allowed me to do this.  It’s all the parents.  I tell them at the beginning of the year this isn’t my team.  This is our team.”  He also thanked all of his sponsors throughout the 20 years.  “The support in this town is outstanding.  It’s that great.  When you go up and ask them…it’s gone up every year…but they don’t blink an eye.  Here you go Moe, here’s a check,” said Lickteig.