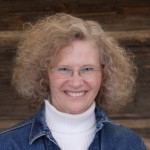 The Dell Rapids Public Library is hosting an AUTHOR SIGNING with Karen Hall on August 9, 2012 from 4 – 6 pm at Jabberwock/Pretty Please.

Karen Hall, a South Dakota author, will never forget her underground tour of the Homestake Mine.  “I went into the Homestake Mine in 1980, and I still dream about it.  Well, it’s more accurate to say I still have nightmares.  What an experience!”  Now she’s published a thriller featuring the mine.  “It’s haunted me for years.  So, I finally decided, why not set the sequel to my first book there?  That mine’s a perfect place for a murder.  Or for several.”

THROUGH DARK SPACES (Karen Hall Books, May 2012) features a strong female protagonist, Hannah Morrison, a young environmental engineer who uncovers evidence that groundwater in theBlack Hillsis being poisoned.  Set in the hard rock gold mining industry of Lead/Deadwood, this book underscores the problems facing people where water is scarce and industry needs a lot of it.  “We’re lucky to have clean water here in the Hills,” Hall says.  “Future generations will have a much tougher time if we don’t protect our water now.”

The communities of Lead and Deadwood are also important in the book.  Hall, who lived there for a short time thirty years ago, says they remind her of a “big old loving—but nosey—family.”  Readers familiar with the area will recognize many of the settings, from the Saloon Number 10 to the Midnight Star Casino to the Ross and Yates Shafts of the Homestake Mine, for the book renamed theCheyenneand the Harney.

THROUGH DARK SPACES follows Hall’s 2006 release, UNREASONABLE RISK, a thriller about sabotage in an oil refinery, which also drew on her engineering background.  Hall was in the minority, both as a woman and as a non-traditional older student, when she graduated from the SD School of Mines in chemical engineering and chemistry in 1991.  Then she took a job in the oil industry, which employs mostly men.  Now she’s writing thrillers – again a field dominated by men.

“I wrote these books in part because I want women to read about – and ultimately see – women in careers that have traditionally been occupied by men.  It’s another way to plant the ‘you can do anything’ seed in young women’s minds,” Hall said.

Hall and her husband Jeff Nelsen, a member of the Rapid City Area Schools Board of Education, have lived inRapid Citysince 2002.  Hall is currently working on a standalone novel, but will soon begin work on the sequel to THROUGH DARK SPACES.  It’s a thriller set in the Bakken oil fields of western North Dakota, which she calls “the new crazy-wild west.”  She is currently president of the Black Hills Writers Group and a member of the Pennington County Planning Commission.  She was also an active member of the committee that wrote the county’s septic system inspection ordinance.

Through Dark Spaces has been released in trade paper and is also available in Kindle e-book format.  For more information, contact the author at karen@karenehall.com or visit her website at http://www.karenehall.com.