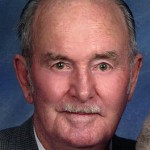 Robert “Bob” Hugh Crisp was born on March 28, 1925 on a farm near Dell Rapids, SD, the son of Harry and Ethel (Thomson) Crisp. He grew up on the family farm and attended Spearville Country School and then Dell Rapids High School graduating in 1943. Bob served in the U. S. Army during W.W. II in Japan. After his honorable discharge in 1946 he returned to Dell Rapids to farm. Bob married Byrne Haak on June 7, 1947 in Sioux Falls, SD. The couple farmed east of Dell Rapids until they retired in 1987. Bob continued to help on the farm until they moved into town in 2001.

Bob was a member of First Baptist Church in Sioux Falls, the Dell Rapids American Legion Post and a life member of VFW #628 in Sioux Falls. Bob and Byrne enjoyed traveling to all 50 states. Bob enjoyed woodworking, gardening, bridge, bird watching and spending time with his family. Bob was preceded in death by his parents; two sisters, Betty Burkhart and Lucille Daugaard and two brothers, Max and Ralph.

Memorials may be directed to the Wounded Warrior Project or the Dell Rapids Trailway Fund.